Please enter your e-mail addresse to subscribe to our newsletterPrivacy 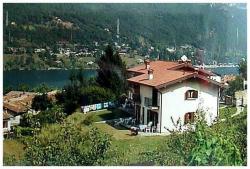 The Idro lake has a stony beach like all mountain-lakes. The recently renewed promenade with children’s games is the pride of the inhabitants of Idro! You can buy all sorts of things in Crone where, if you arrive by car, you can park easily. You can also visit Crone on foot and park your car in the private garage of Casa Flora.

The house has a floor area of app. 100 square meters and is equipped for 4/6 persons. On the ground floor there is a toilet with a washstand, a kitchen, a living room with a double sofa bed and satellite television. Folding doors give access to a terrace with a small garden, internet WI-FI. A staircase in the living room gives access to two bedrooms and a bathroom. One bedroom has a double bed; the second bedroom has single beds well equipped with mattresses, sheets, pillows and blankets. The bathroom has a shower, toilet, washstand and bidet. There is a washing-machine in the basement next to the garage.